As our taxi driver cut off a car next to us, he glanced at me and proudly said, "This is driving. Ecuador style." I just laughed, dryly. Quito was a busy city. Maybe a tad too busy for my liking. Cars and buses puffed and huffed, leaving trails of smog behind. Amidst the chaos that was the traffic, there was something quite romantic about Quito. It was easy to forget that we were in the 21st century when everywhere we looked were buildings from the 16th century.

Our 11-day trip in Ecuador began a day after Lila turned 2. It was her birthday trip and a gift for her parents. Thank you, Lila. We flew from Houston straight to Quito, the country's capital city. The flight took five hours and we landed in Quito at midnight.

During a turbulence Lila threw up on herself. We waited for our luggages with our red eyes and cranky vomit-smelling toddler. One bag, two bags. The third one never appeared on the baggage conveyer belt. The one with all the goodies we had gathered for an orphanage that we wanted to visit in Quito. Turned out the baggage was still stranded in Houston with several of other passengers'.

"Write down the name and address of the hotel you're staying and we'll make sure you get it at 7 AM on Saturday," the nice lady said. She felt bad, I could see. There was only one flight per day from Houston to Quito. We did not have a choice but to trust her. Fortunately, our appointment to visit the orphanage was on Saturday at 9.30. At least we had our personal items with us. Off we went to our AirBnb in Old Town Quito, 45 minutes from Mariscal Sucre International Airport.


Wantara Suites, the name of our AirBnb, was located in walking distance to almost everything interesting in Old Town Quito. Walking, by the way, was a strenuous activity on the first day of being in Quito. The city sits at an elevation of 9,350 ft above sea level and acclimatization is crucial. I lost my breath walking 10 steps uphill to buy some bread from a neighborhood bakery. We were lucky to not experience a full blown altitude sickness though. Coca tea was my savior, I believe. 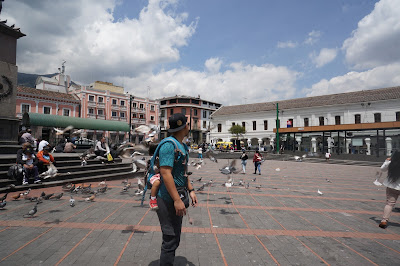 Initially on the first day we wanted to explore Quito using the Hop-On-Hop-Off tour bus. The double decker bus was supposed to make its way around all major attractions in Quito for a very reasonable price. We walked from our accommodation to the bus pick-up point. The brochure stated that the bus picked up passengers once every hour and when we arrived at the stop it was 6 minutes past the pick-up time. Assuming we already missed the bus, we started walking to the center of Old Town Quito, hoping we could catch the bus at other meeting points.

It was Thursday and the city was busy. We thought it was just how Quito was until we ran into some road blocks and a lot of police officers, even the army. On some streets people were just gathering behind the police and looking restless. Curious, I asked a cafe patron about what was happening. The guy did not speak English and I speak less than poquito Spanish. The message I deciphered from our disastrous conversation was either: the President's dead or there is a demonstration regarding the President. Either one was not good.

Because of the road blocks the bus seemed unable to keep its schedule. Traffic was exceptionally terrible that day. Tired and cranky from walking aimlessly and inhaling fumes from idle cars and buses, we finally gave up and went back to our Airbnb. Turned out the President was alive and there was no demonstration. All the commotion happened because the President of China was visiting Ecuador.

Day 2
The second day in Quito was scheduled for the orphanage, Mitad del Mundo (the Middle of the World), and TeleferiQo (the highest point in Quito). I was shocked to learn that we had to leave at 8 am for our 9.30 am appointment. The orphanage was located on the outskirt of Quito, on the other side of our accommodation. And our driver said traffic would be particularly bad that day because.. China.

We kept waiting for our luggage, but it never arrived. Not on time, at least. So we left almost barehanded. Luckily we had bought some yogurt and jars of baby food the night before so at least we had those. The visit went great. Lila was happy to meet children her age, but too shy to instantly played together. It took her a while to warm up to those sweet kids. She never warmed up to Maria Louisa though. She was the kids' pet llama. We ate the yogurt and baby food together then Tania, the Communication Director, gave me a tour around the property. 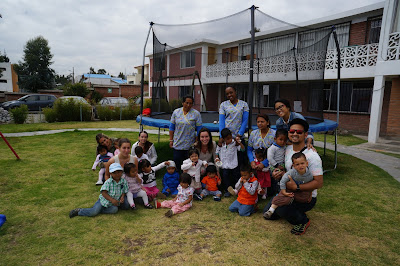 The orphanage that we had chosen was Hogar Para Sus Ninos (For His Children Home). We chose that particular orphanage because it was located in Quito (we did not have time to venture out of the city) and because they took care children from newborn to seven years old. We wanted Lila to meet children that were around her age. Once again I want to thank Lila's friends and their parents for Lila's birthday gifts this year. Thank you for participating in our pay-it-forward effort.

After bidding adieu to Tania, the children, their tias (house mothers), and Maria Louisa, we continued north to Ciudad Mitad del Mundo or the Middle of the World. Before paying a visit to the equator line we had lunch at Fiambre's, a restaurant that served Andrew Zimmern his first ever cuy or guinea pig. We ordered what Zimmern had and I found the meat to have a familiar taste and texture, although not at all spectacular. I am so sorry, guinea pig!


Fiambre's was a stone throw away from the entrance of Ciudad Mitad del Mundo. Here located the Monument to the Equator which highlighted the exact location of the equator. By the way, if you have not made the connection yet, the name Ecuador was derived from the word 'equator'. We paid USD7.50 per adult to enter. It was gratis for Lila. The Middle of the World was a nice touristic visit with restaurants and souvenir shops. Although I would not put it in my itinerary if our time in Quito was tight. The drive from Old Town Quito was at least an hour long.

The next and final stop for the day was TeleferiQo, one of the highest aerial lifts in the world. It rose from 10,226 ft to 12,943 ft. The trip in the gondola to go to the peak took 20 minutes! Lila was bored after the first 5 minutes, but she managed to sort of keep herself together because there was another couple in the gondola with us.


TeleferiQo would have been a very nice visit on a clear sunny day. Unfortunately it was suddenly cloudy when we reached the ticket booth for the gondola ride. Since we were already there we decided to purchase the tickets and hoped for the best. Well, the best was not seeing anything at all from the top because the fog was so dense. So we drank hot chocolate and ate cheese empanadas instead at one of the cafes. Then we took the gondola ride again to go back down. Despite nature not being on our side, we still had a great day. 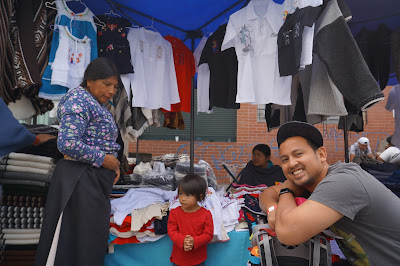 Saturday was our third and final day in Quito. On Sunday we were scheduled to fly to the Galapagos! Coincidentally, Saturday was market day in Otovalo. The Otovalo market is the most famous and one of the biggest traditional markets in all of Latin America. It is a market that one should not miss while in Ecuador. And I love traditional markets. I don't necessarily shop 'til I drop, but I just love being in the middle of the hustle and bustle. I love taking pictures of it. I love the colors, smells, and sounds of a traditional market.

Saturdays in Otovalo had always started the same way; at the crack of dawn. The animal market opened the market day. To experience this one needs to stay in Otovalo from a night before (because it takes around 3 hours by private car and 4 hours by public bus from Quito) and does not care about animal rights. We missed this animal market because I was not really interested in seeing it. It was the artesania (handicraft) market that I was aiming.

We left our airbnb at 5.30 am to beat the traffic. Our driver insisted that it was not a crazy idea, despite me trying to persuade him otherwise. Magically, all of us were ready at 5.30 am sharp, all bright-eyed and bushy-tailed, even Lila. 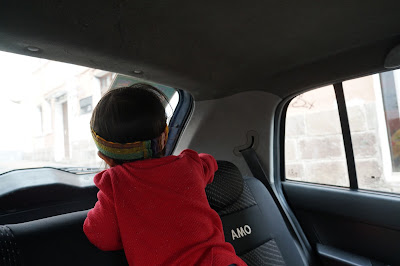 We were exchanging: "Ah, yes, traffic's so much better today!" and "I'm so glad we left early" when suddenly our car stopped. It stopped behind other cars. Too many to count. Road work was the explanation we received. We went from three lanes to one. Talking about a bottle neck situation! We were stuck there for more than an hour.

We arrived in Otavalo at around 9.30 AM. En route to Otavalo, we made a quick stop at a small town called Cayambe. Along the road were cafetarias (small eateries) with huge signs that said bizcochos. Our driver, with his limited English, said that we had to try these bizcochos with a cup of coffee or hot chocolate. So we did. I am so glad that we did, because those bizcochos were divine! My husband bought a bag full of them and we fought over the last one. I even hid those heavenly things from my daughter because she would not stop eating them. I think that was the only regret I have; not buying more. Oh, and not taking pictures because I was too busy eating them.

Bizcochos are sold everywhere in Ecuador, but the ones in Cayambe are the real deal. Bizcochos are flaky buttery biscuits that go together well with hot drinks or by themselves. They are light, airy, and melt in your mouth. Especially when they are straight out of the oven. And the ones I had were hot and fresh. Absolutely delicious! I have to stop talking about it. I'm literally salivating. 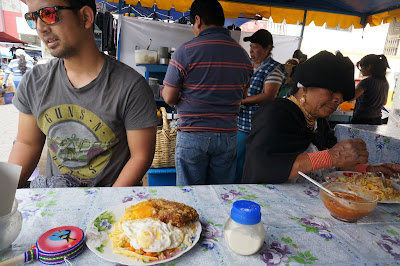 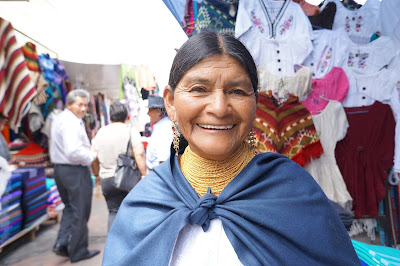 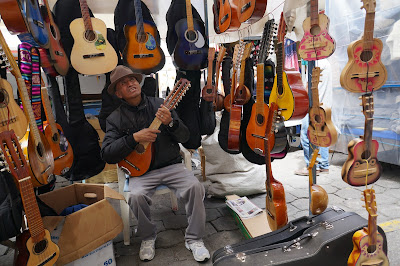 Otavalo was overwhelming! Simply because it was so huge and had so many selections of handicrafts, fresh produce, and food. Locals outnumbered the tourists. That particular fact made me happy because by following the locals we could find the best place to eat or what things to eat. We finally decided on a plate of triple carbs and two pieces of protein (read: rice, potato cake, pasta, fried chicken, and fried egg). Mmmm tasty!

Otavalo was the perfect place to shop for local products and crafts. The varieties were excellent and the price lower than any souvenir shops in Quito or the airport (duh!). I had to pace myself and not shop too crazy because we were heading to the Galapagos the next day and going over the baggage limitation was not an option. 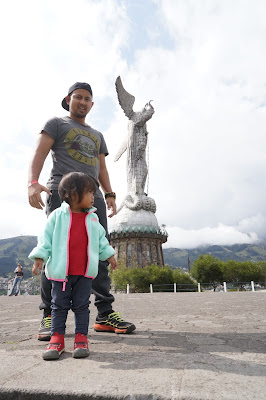 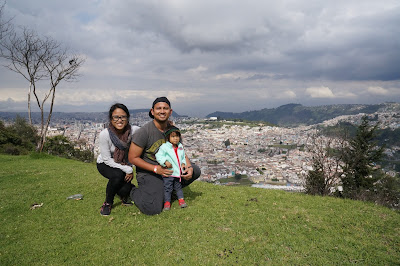 After Otavalo we went straight to La Virgin del Panecillo, just 10 minutes away by car from our Air BnB. El Panecillo was a 134.5 feet aluminum statue of Virgin Mary that stood erect on top of a 9,900 feet hill, facing Old Town Quito. It took 7,000 pieces of aluminum to create the statue in 1976. It is the largest of its kind in the world. That day nature was on our side for we had a sunny day. After an unsuccessful day at the TeleferiQo, we finally got to see Quito from up high. 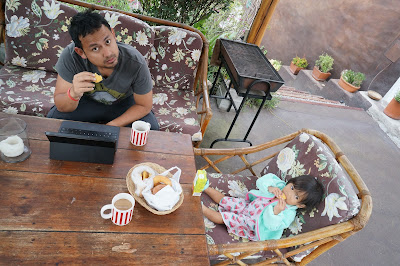