Traveling with Lila: The Whys and Hows 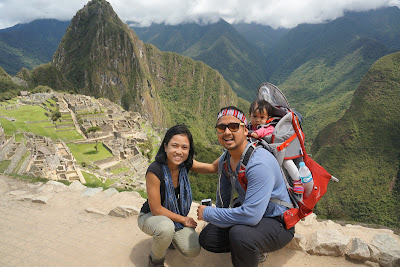 We just got back from Iceland last week. So far Lila has been to 5 countries outside of the USA (also Alaska) and she has been on 24 plane rides in her 19 months of life. We're not planning to stop traveling any time soon.

As it turns out, some of my friends and family are curious about how we travel with a small child. Mostly because they know how hard it is to go grocery shopping with a baby or toddler, let alone going to another country. Mamas, I feel you. I still get anxious taking my child to restaurants in our neighborhood.

Nevertheless, questions on how we travel with Lila got me thinking: how do we do it? I think the simple answer would be: we have stopped over-thinking. To be honest, I even forgot to pack snacks for Lila for our 6 hours trip to Iceland last month. I am, by no means, an expert in traveling with babies, but there are things that I've learned from my experiences of traveling with Lila that - I think-  are worth sharing.


The first trip that got me all anxious and over-prepared was the one we took to Jakarta, Indonesia. It was a BIG trip with a total of 24 hours of flying and layover. And Lila was only 8 months old then. We had never gone on a plane and she was a cranky baby in general. She hated being outside the house. I kept thinking of ways to keep her quiet and distracted during the flights and how other passengers would react to us. That trip actually went great. She did cry during the flights, but she was also entertained by the TV remote and the friendly flight attendants. Lila was just being an 8 month old baby; she cried, made a mess, giggled, screamed, pooped (lots of times), slept, and ate.

Coming back from that trip to Indonesia, Lila became a new baby. She was suddenly more easy going. She didn't mind when other people tried to hold her or interacted with her. And I, as her mother, gained a whole new self confidence. I cared less about what other people think. My way of thinking was (and still is): if I could survive that 24 hours plane ride alone with Lila, then I could do anything.


Even before Lila, Aris and I liked to travel. We were always drawn to nature and low budget traveling style. After that first Indonesia trip and spending 3 nights in Tokyo, Japan, on our way back to Houston, we threw away any hesitations to travel with Lila. We also did not limit ourselves to staying at resorts or hotels. Mainly because it was expensive. Ha! So we booked plane tickets to Peru and we went to Machu Picchu. We booked plane tickets to the Dominican Republic and we spent time by the beach. We booked plane tickets to Jakarta and Bali, also Alaska, and Iceland. We traveled in a train, an RV and in a camper van. We put Lila in all sorts of traveling situations (safe ones!) and see how she would react. We basically experimented with her.

It helped that Lila liked to be outdoors and that she was not a terribly fussy eater. It also helped that I had very low expectations of her and of me. I think flexibility is key when traveling with small children. My mindset was this: being uncomfortable is a part of life. As long as she was not sick, we would keep doing things that made traveling easier (and cheaper); doing a road trip, sleeping in a car and not having a rigid schedule. Of course, as the parents, something got to give. In Iceland we did not do a lot of hiking because it was sometimes too cold or windy and Lila was just not having it. So we had to make do with seeing sceneries from the car. We did circle the whole country so that was awesome. I also had to give up scuba diving in Iceland and just marveled at Aris' pictures. Somebody had to stay with Lila.

"She looked like she had fun on that trip!" a friend of mine said to me after looking at our pictures in Iceland. Well, pictures are taken in a matter of seconds. I also curated the pictures I put on Facebook. Lila had a number of meltdowns and tantrums, just like any toddler would. Eating at restaurants were always hard and tricky. She didn't sleep well in the camper van and sometimes tried to escape from the carseat or simply refused to be buckled into it.

We had an event where she would not stop screaming crying and refusing to nurse (my ultimate weapon to keep her calm!), and me, also crying and begging her to stop crying. We were in the middle of nowhere and super tired from all the driving. It was horrible. We felt like terrible parents for putting her in that situation. We only just started our road trip in Iceland and because of that event we thought about going back to Reykjavik and stayed at a hotel instead. And what happened the next day? We drove east and did not look back. Lila did not have that kind of epic meltdown again, but we did deal with a lot of refusing to sleep and crying. We kept going and before we knew it we were back in Reykjavik with a lot of wonderful memories of the road trip. I have to thank my husband for this. He was the more rational and adventurous one. If not for him we would not have as many great memories as we do now.

Aris said something that really stuck with me. Lila was finally sleeping after that epic meltdown and I asked Aris, "Do you regret going all this way to Iceland and doing this roadtrip with Lila?" Mind you, we had not slept in what felt like forever and both of our hearts were broken from listening to Lila's crying. He answered, "No. We have decided to do this so we are going to make it work. We will always put Lila's well-being first, but her meltdowns shouldn't deter us from exploring Iceland." We are stubborn people. So we kept going.

I think traveling with a small child is harder on the parents than the child. Aris and I were exhausted (and sleep deprived) for most of the time we traveled, but the thought of being in a foreign country and doing activities in gorgeous settings beat the exhaustion. I would rather travel than not travel, even if it means being tired for most of the time. Besides, the smiles and laughters trumped the meltdowns and tantrums. I'd do everything again in a heartbeat.

Knowing the child's temperament helps a lot in traveling. I learned the hard way to never ever be without snacks and water (or milk). I have videos of Elmo on my tablet for when Lila is inconsolable and extremely bored. Elmo is my hero and I'm not ashamed to admit that. In numerous occasions (more than I care to admit), I also bribed Lila with ice cream. In my defense, ice cream is made of milk. And milk is good. So yes, Lila has had lots of ice cream.

Up until now Lila is still nursing and that helps so much. I will have to figure out ways to keep her content when we wean her one day. Plane rides are never easy no matter how many times we've done them. As I've said before, I now care (so much) less about what other passengers think. I do my best to keep Lila happy, but if she makes noises, I don't bend over backwards to shut her up. 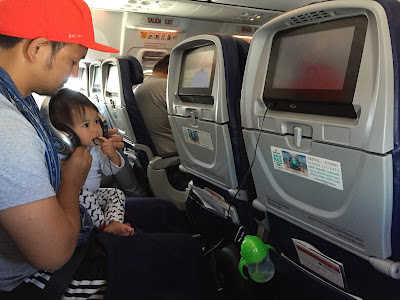 So, how do we travel with young humans? Be prepared for surprises (this includes vomits and other bodily fluids), have low expectations, care less about what other people think, relax, and just have fun. Don't be too hard on yourself, your spouse, and your child. Safe travels!